What is Linux, anyway? Here is our explanation.

New to Linux? Start by reading this one page PDF tri-fold. For some highlights, check out why Linux is better.net. If you have never downloaded “Linux” before and would like to try booting your computer with Linux, just ask. We usually have available CDs (DIY or pressed) and versions of Linux we can copy to your USB flash drive at no charge. Some of us regularly donate time and materials to provide Linux to newcomers. You can even try Ubuntu without booting or installing it through an emulation.

Linux is a very quickly updated, widely used, trustworthy, secure, fully featured alternative operating system offered with many programs/applications. You can use open source software without cost. Donations of many kinds are often gratefully accepted by the developers and reasonable fees may be charged for distribution medium within the terms of the licenses. 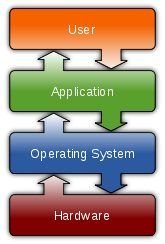 Every Android phone is a quite powerful little Linux computer. Android phones collectively outsell all other phone operating systems. Mac OS X and the iOS of the iPhone are both based on an open source version of Unix called Darwin.